North America Construction (1993) Ltd., together with Brookfield Financial, Acciona Aqua, AMEC Foster Wheeler and Stantec has been awarded the design and construction of the city's new water treatment system. 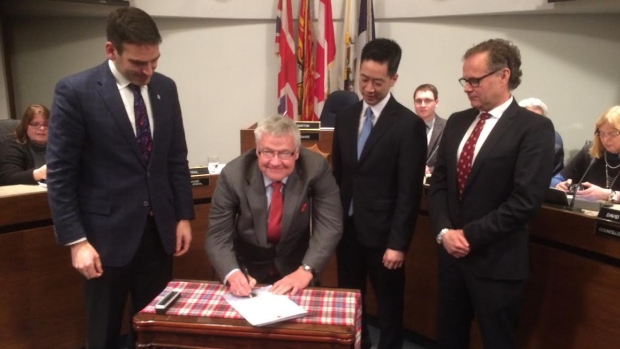 Saint John councillors were in a celebratory mood on Monday night at a ceremony to mark the signing of a $216-million contract that will see the design, construction and operation of the city's new water treatment system turned over to a public-private partnership.

"Welcome to a council meeting that is 230 years in the making," announced Saint John Mayor Mel Norton before reading a lengthy proclamation on the water deal which was promptly approved by council.

City council had made the provision of safe, clean drinking water its top priority.

'Welcome to a council meeting that is 230 years in the making.' - Mel Norton, Saint John mayor

The project will feature a water treatment plant with a capacity for 75 million litres per day along with the construction or replacement of 20 kilometres of piping.

As part of the arrangement the water treatment system for west Saint John will be upgraded.

Norton said he expects the federal and provincial governments to pick up "roughly" 50 per cent of the construction costs, although that has yet to be finalized.

"They've agreed to contribute up to one half of the eligible project costs," said Norton.

A municipal report released to city council on Monday notes the final funding agreement with the federal Crown corporation P3 Canada will be concluded "over the next few weeks" based on the eligible costs of the project.

The report says the $216 million price tag is $40 million less than one estimate provided to the city in March 2013.

It also says a "value for money" analysis estimates the project would cost $24 million more had the city not used a P3 model and opted for the traditional approach of the municipal, provincial and federal governments each providing one-third of the funding.